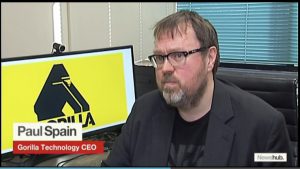 Samsung’s Galaxy Note 7 appeared to be the best ever phone from Samsung until safety issues were found. Faults in either design or manufacture meant the smartphone could catch fire without warning. TV3 reported on the issue and visited Gorilla Technology to talk with CEO Paul Spain about the issues.

TV3’s Newhub reporting highlighted the unprecedented nature of Samsung’s Note 7 global recall in September after it emerged there had been 35 confirmed cases of batteries catching fires during charging.

Update: Samsung have now cancelled the Note 7 and permanently withdrawn it from sale. All those with this phone should return it to the place of purchase for a refund. The Note 7 is banned from being carried on flights worldwide (whether switched on or off).

Watch the video at TV3 Newshub.